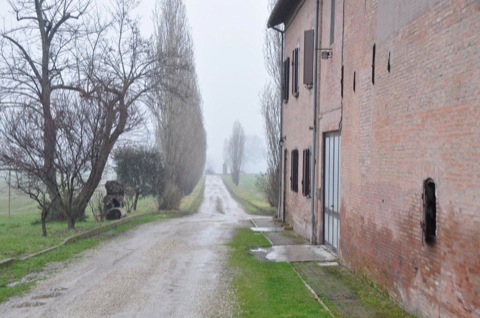 We are in a company that insists almost entirely on a single body. The feed is entirely produced in-house. “I discovered Reggiana cows – explains Luca Conti – when doing research for an indigenous animal for the production of Parmigiano Reggiano”. “I am proud of the choice we have made”.

We are in a place where four singular twin hills, on which as many fortresses were erected, give the Town its name. The Castello del Bianello, now a private residence, was the residence of a branch of the Canossa family. Some ancient villas embellish the landscape. The centre of the capital, at the foot of the hillside, is known to Reggio for its beautiful outdoor pool but also intrigues all for its small public garden of fine workmanship and for the modern marble statues with which the town of Quattro Castella has decorated the piazzas. Here the residential areas of rich buildings battle it out with the lands of the farmers’ meadows. We cheer for the latter.