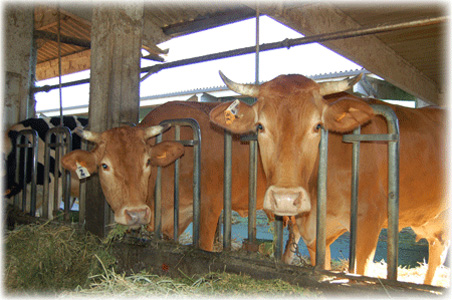 Villa Argine has an ancient history and has enjoyed a long independence as a medieval municipality. In the church there are interesting fragments of fifteenth-century frescoes.
In 2006 there was a theft of Reggiane at the Ferrarini farm. Nevertheless, here you can meet Londra, a cow with a noble name who is ten years old and weighs 9 quintals. It should be noted that, in the heart of the Bassa Reggiana, this farm gives continuity to the cattle of Celeste Parmeggiani, one of the supporters of the recovery of the Reggiana breed, now deceased. It is here that we can find the mighty Celeste bull, reproducer of indomitable quality as well as historical. In Franco’s words we hear his convictions: “These are animals that we have always liked, an expression of the tradition of our family. Cvparr’s budgets have always been excellent. They are more robust animals, the cows impregnate well, they have less waste, the milk is of better quality, and the animals live more in the stables”.