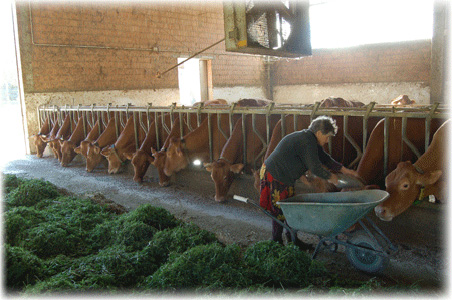 The company is located within the first hills of the Apennines, behind Bianello.
On the last Sunday of May, under the Castello di Bianello there is a spectacular historical costume procession, with hundreds of people and well-known actors in the roles of Matilde di Canossa and Henry V.
Despite being young, the Montruccoli brothers are among the historical breeders of Vacche Rosse, because they were among the first to rediscover the breed in the Nineties. They immediately found that the milk was garnering a higher price tag. Among the zootechnical characteristics they have found for their red cows, the brothers note the fact that they are more rustic animals and less prone to the onset of diseases.